After an enjoyable briefing over a drink or two (or even a few?) the night before and the customary group photo outside the Mt Manganui Beachside Holiday Park, we were on our way, heading south towards Papamoa in two roughly-equal groups, braving the light drizzle and occasional showers that accompanied us most of the day.

After a few kilometres on the main road linking the two towns, we turned inland and on to a very picturesque cycleway running beside a small stream with several small lakes and nicely planted wetland areas and an abundance of up-market housing.

Arriving at our morning tea stop, the Henry & Ted Café in Papamoa East, the second group were very surprised to find they had unknowingly passed the first group.  We put that down to skillful navigation on the part of the second group and a puncture or two that delayed the arrival of the first group.  Fortunately for the first group, the large covered outdoor area was big enough to accommodate both groups (and our bikes) and the large stack of the cafe’s “famous” scones (which were delicious) meant that no one went hungry.  All in all, an excellent place for morning tea on a slightly inclement day. 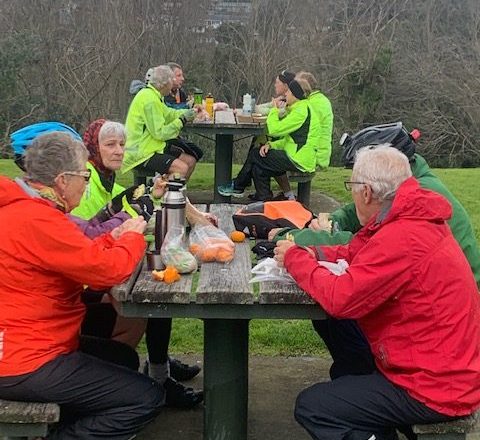 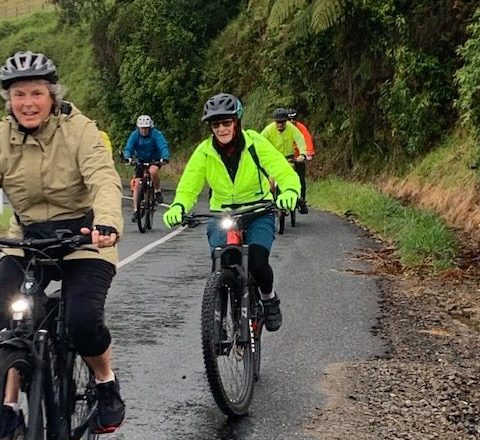 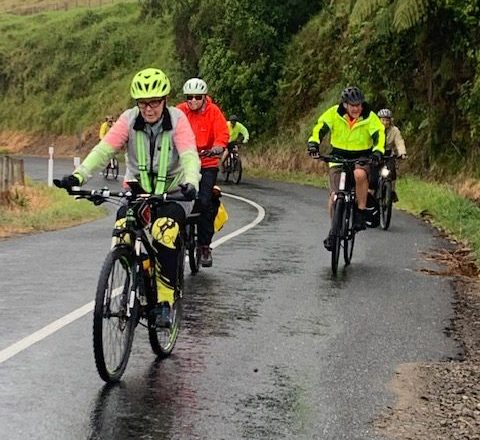 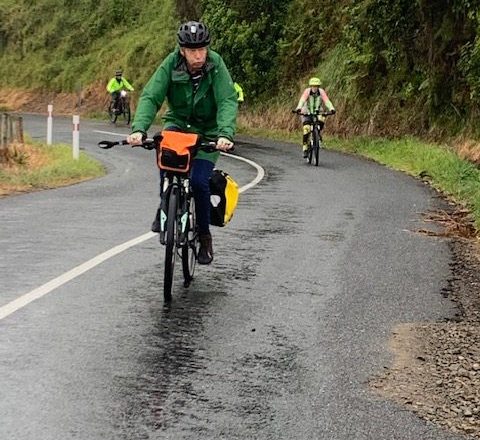 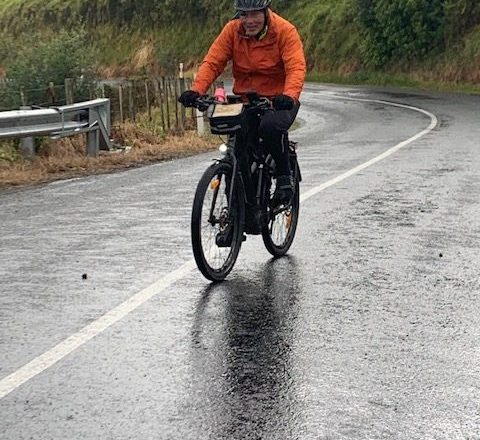 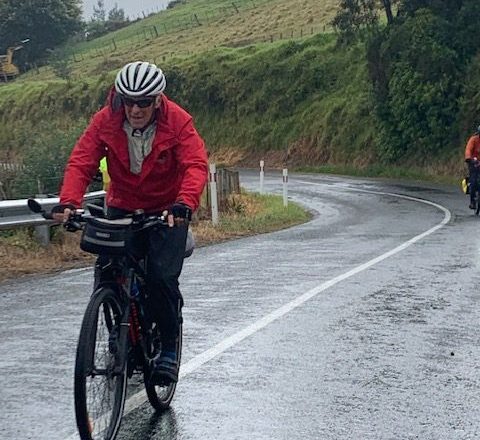 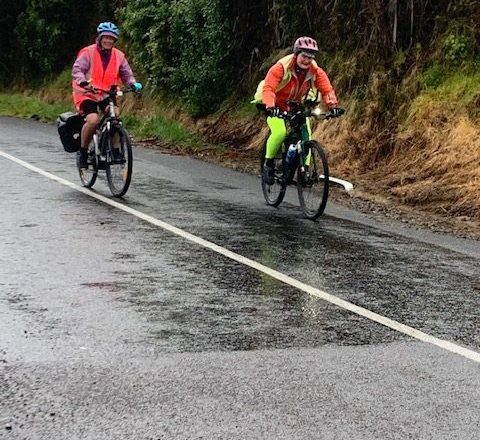 From there we headed inland, looping around through a large block of land under development before joining SH2 and following it almost to Te Puke.  After turning off on to Manoeka Road and then Te Puke Quarry Road, we soon found ourselves at the end of the flat land and the end of the tar seal.  The long, slow 5km slog to the top of the 260m hill was, well, long, slow and tiring, especially for those of us on real (non-e) bikes.  On reaching the top, we were rewarded with an equally long and slightly faster descent, which dropped us nicely into Waipuna Park in Welcome Bay, our lunch destination.  And another excellent choice it proved to be with a large covered area to keep riders and bikes sheltered from the last of the day’s showers, outdoor tables, toilets and even a coffee cart that some of us chose to support financially.

After a leisurely lunch, we rode into Tauranga’s central business district on a mix of busy roads, quiet roads and cycleways before crossing the harbour on a narrow and windy walkway hung slightly precariously off the side of the railway bridge.  From there we made our way to Bayfair and back to the holiday park, arriving there at around 4.00pm.  After a little rest and relaxation (and a soak in the hot pools for some), most of us headed out to the Mount Ocean Sports Club for a very enjoyable evening meal.

My thanks to Simon and Carol for leading the two groups, and to Louise Sinclair for putting together such an excellent and varied route for us to enjoy.

Today was ‘pack up time’ from Mount Maunganui and a drive to Bethlehem, over the Wairoa River to Clarke Rd, where we parked up motorhomes and cars. We started with a coffee at the Clarke Road Kitchen. This café is worth a stop – the food was delicious. 1,2 Today’s ride was the Omokoroa Cycle Trail, a 20 km (one way) trail from the Wairoa River to Omokoroa. It was a combination of minor roads and trails, and beautiful sea birds.

The Ongarahu Pa at Huarua Park is along this trail and is considered one of the most well preserved defensive fortifications in the country. Settled at the end of a promontory, it is easy to see why it was a perfect site for a pa.

As we came close to Okokoroa the trail took us close to the sea as we meandered our way around small headlands and along estuary rivers, sometimes on boardwalks.

Once at Omokoroa we cycled to the main centre – a few shops and a pub. The tide was in. The only thing missing was the sun. Then on around the golf course where we stopped and had a bite to eat before continuing, joining up with the trail, and back to Clarke Road.

From here we drove on to Athenree Holiday Park. This is a gem, with welcoming hosts, a hot pool, and a spa that took us all very comfortably. Just the thing for our cycling muscles.   A treat awaited as dinner was prepared by Wolfgang and helpers. The kitchen had a covered outside area, complete with a table to accommodate us all AND heater.  Camaraderie and wine flowed – what more could you ask for at the end of another day’s cycling? A big thank you to Wolfgang. 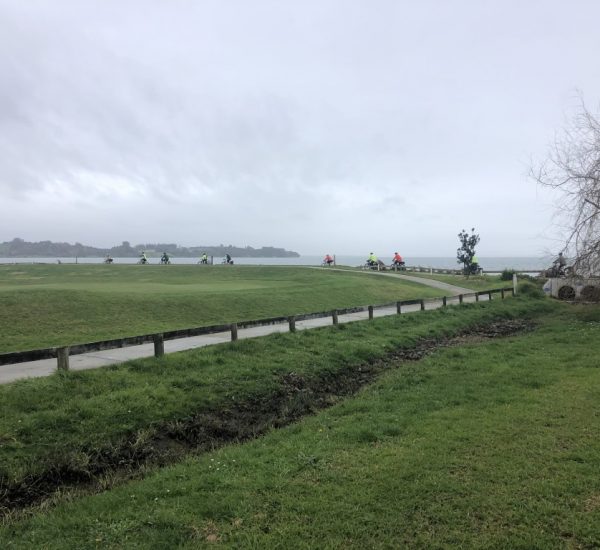 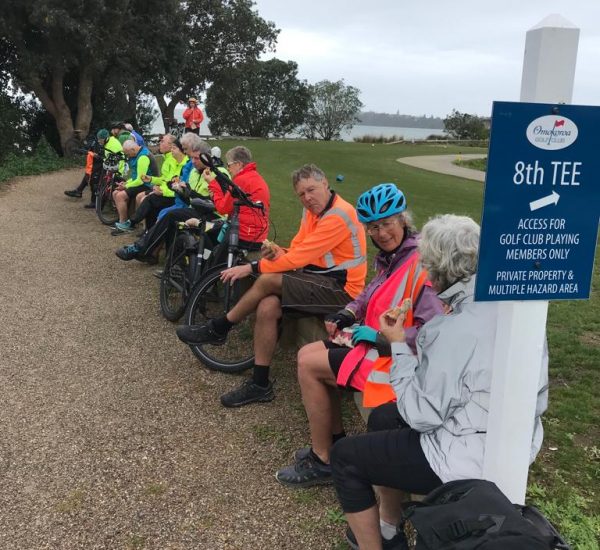 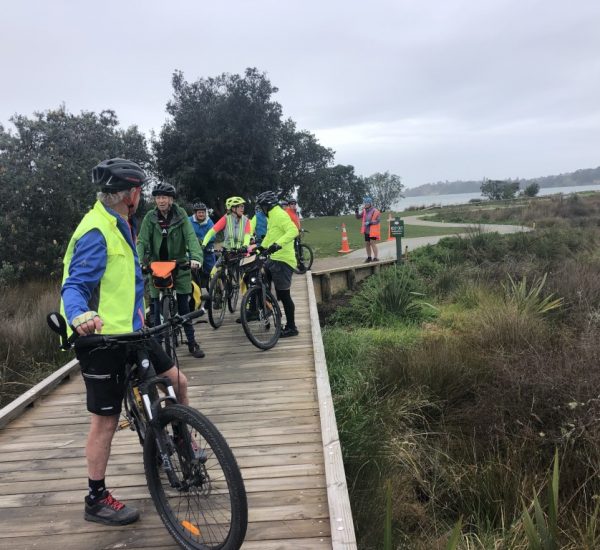 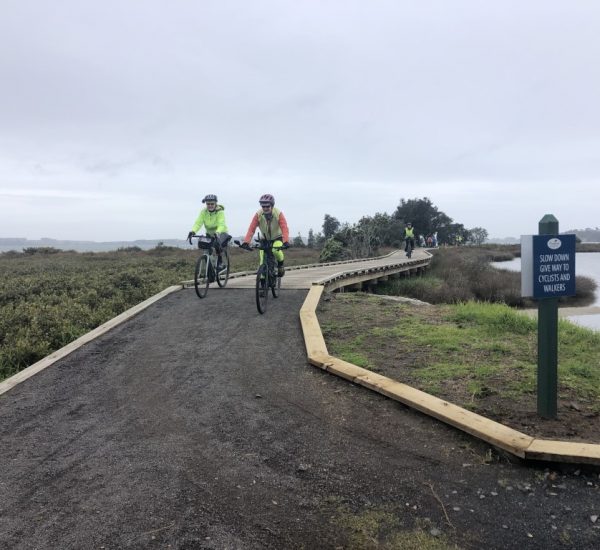 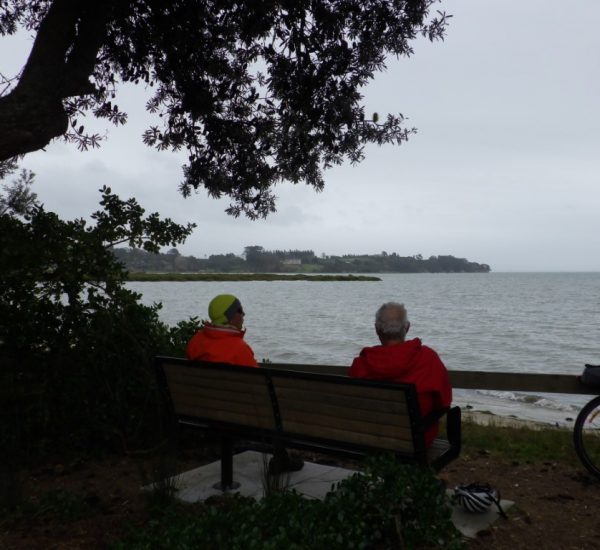 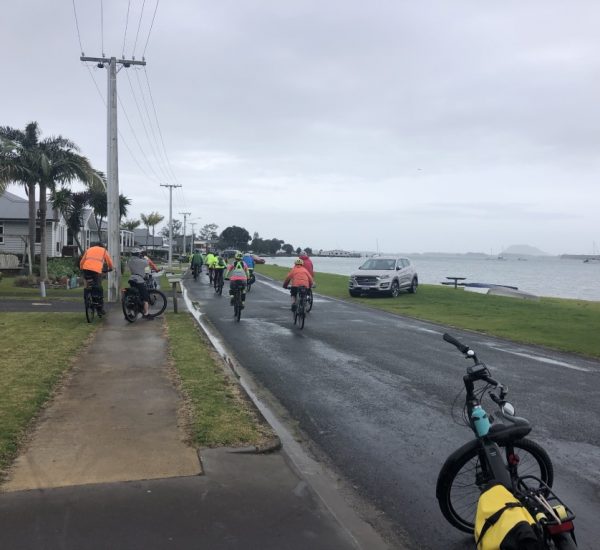 We left Holiday Park 10 am (on the dot) and drove in convoy for the Flat White Café, Waihi Beach, overlooking the raging, white foamy ocean, for the habitual ACTA coffee fix.

From there we drove into Waihi.  The wind, more than the rain gave us the opportunity to have a good social day to relax by eating, shopping, and visiting the Waihi Heritage Museum.  The women relished traipsing up and down Waihi’s main street visiting all the op-shops (there are quite a few of them), workshop galleries and “hard to find” bookshops, while the men discovered their favourite thing – you guessed it … the Waihi bike shops.

Back at the Athenree Holiday Park some took the opportunity to explore the Athenree Foreshore, but most were soaking in the hot springs….bliss!

Chef:     Wolfgang and his sous chefs

Anything missing??  Yes…..the 65 kms cycle ride through Waihi/Karangahape Gorge/Waitawhete loop route back to Athenree.   It would be a great excursion for another ACTA cycle trip.

Gale force winds and heavy rain forced the cancellation of ride no.3 on Thursday, and the departure of half of the group.

And then there were ten – We departed Athenree Holiday park and headed towards Bowentown and up to the lookout at the end of the peninsular. Some climbed down to the beach and explored the caves, while the rest tried to look at the view through the fog. We rode down to the parking area for a quick look at the inner harbour beach and a toilet stop and then through the campground carpark to the southern end of Waihi Beach and the wild surf.

The ride continued through the streets and walkways amongst the elaborate homes of Pio Shores, where Dave lead through another walkway, followed by John, while Carol thought she new better and lead the rest of the bikes up a ROW to a private bach.

Reunited, we rode to the boat ramp and a view across to the Holiday Park at Athenree and then followed the cycle paths towards Waihi Beach Village and the Flat White Café with more views of the raging surf.

Refreshed, we had a leisurely ride along the roads back to Athenree, ready to pack up and went our way.

Another great trip came to end. We must go back and complete the planned Day 3 trip..