Mount Taranaki beckons us in the early morning, across the water from Mokau,
as we prepare to start our tour of Taranaki's road tunnels 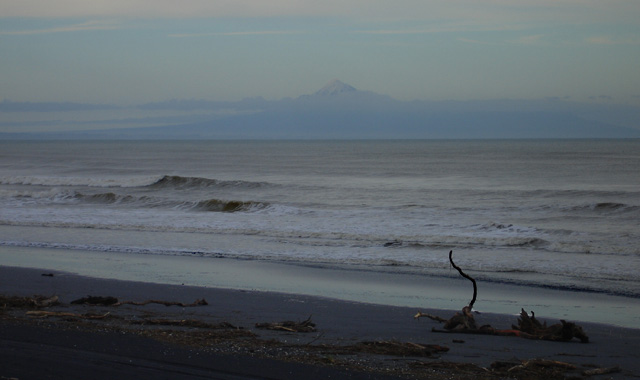 This year's selection of adventurers. 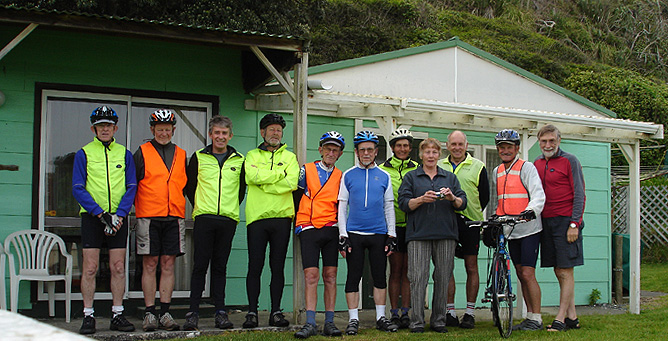 The view from the sag wagon.  We all took 10km turns at driving.
Somebody had to do it!
This is just after leaving Mokau. 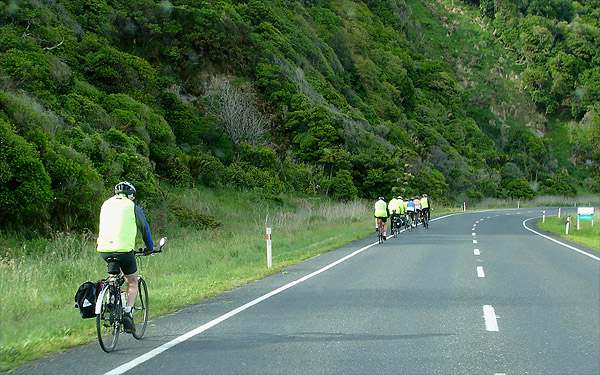 Our first morning tea on the road.  This year we were more civilized than 2006 -
we had a coffee plunger - forget the instant stuff. 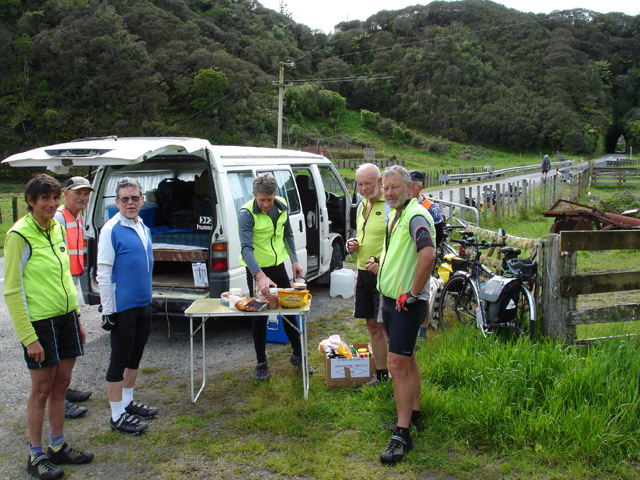 Observant viewers will have noticed our first tunnel, on Okau Road,
at the right side of the photo.

Well, that's the first one out of the way.
The Okau Rd Tunnel is the shortest and widest of the seven we will ride through. 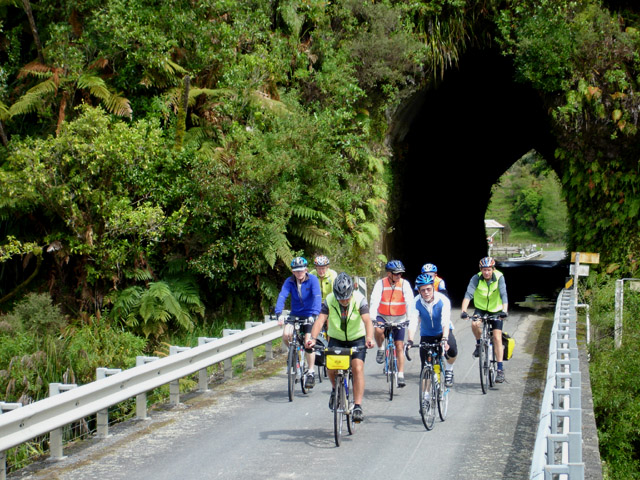 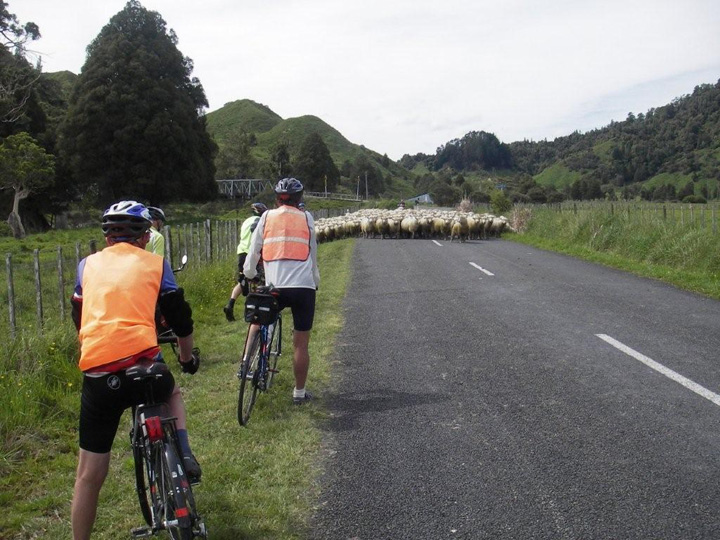 We eventually did what the farmer loudly suggested, "Keep riding through them!"
We spoke to Mrs Farmer.  She asked where we were going.  When told she repeated what the lady in the Mokau Store had said,
"You know there is a very steep hill, don't you?"

On to our first stretch of gravel as Okau Road turns toward
Mt Damper Falls after leaving Kotare. 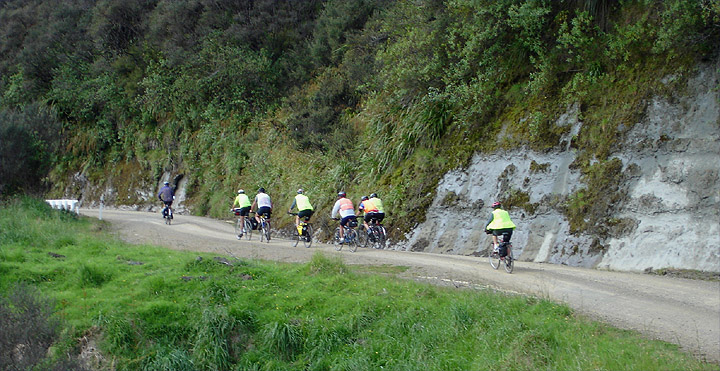 Pete starts the climb up the Mt Damper Hill..... 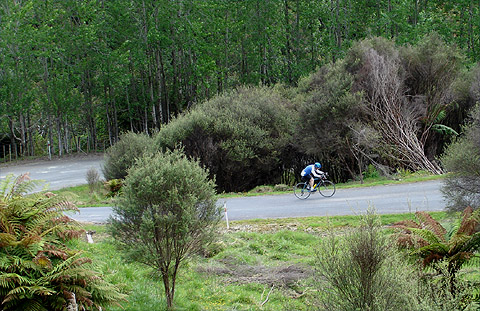 This hill is so steep that the road has been sealed to provide traction.
Many of us walked quite a bit of the hill.
At the top we had never been so pleased to see a gravel road.

Lunch before our walk to the falls. 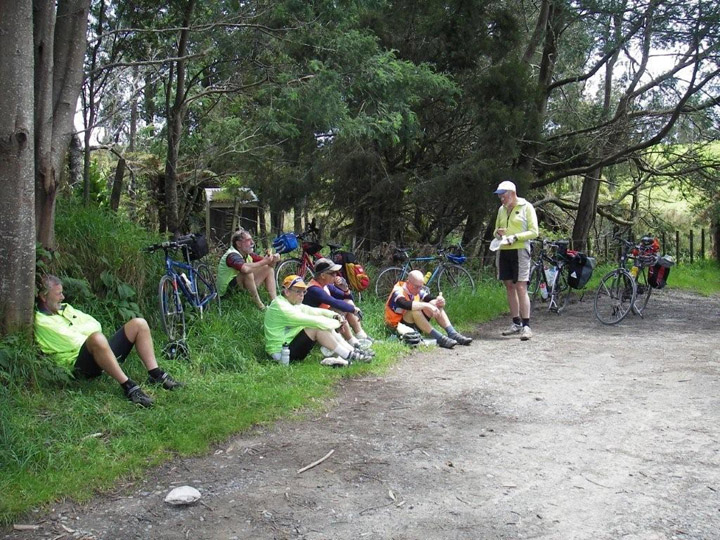 Looking down the valley from above the falls.
It's around 100 metres to the bottom. 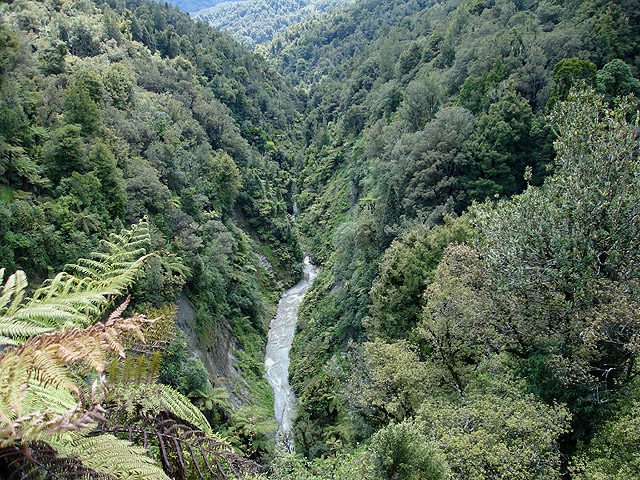 Mt Damper Falls are the highest in the North Island -
85 metres from the top and 79 for the final drop. 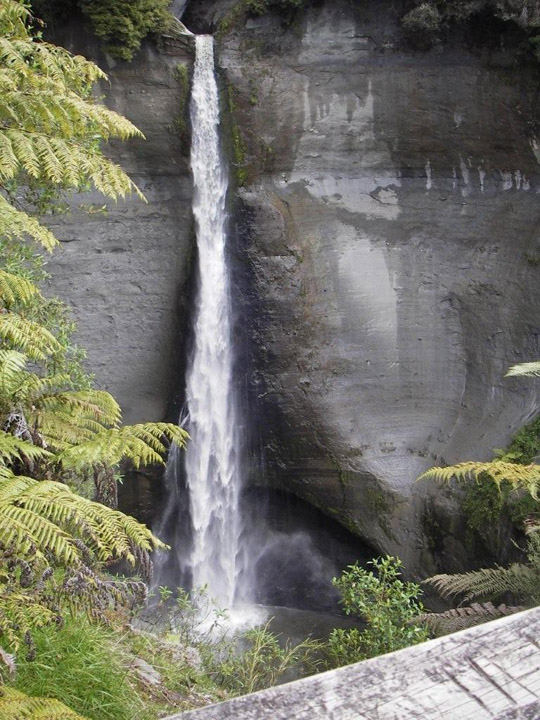 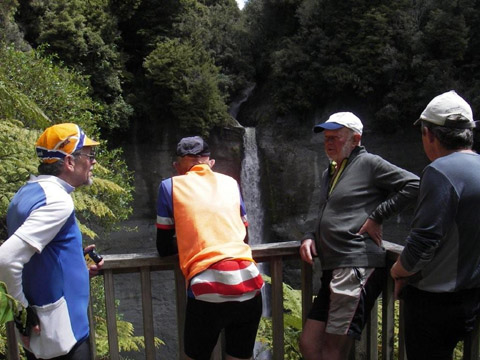 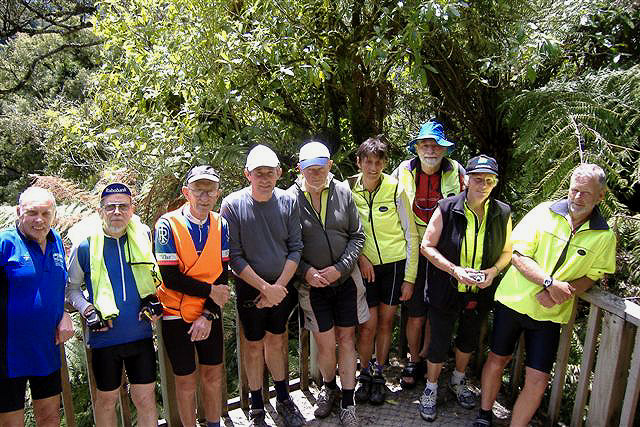 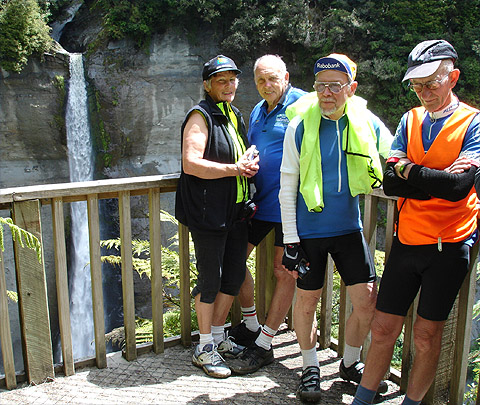 The bottom bit of the falls. 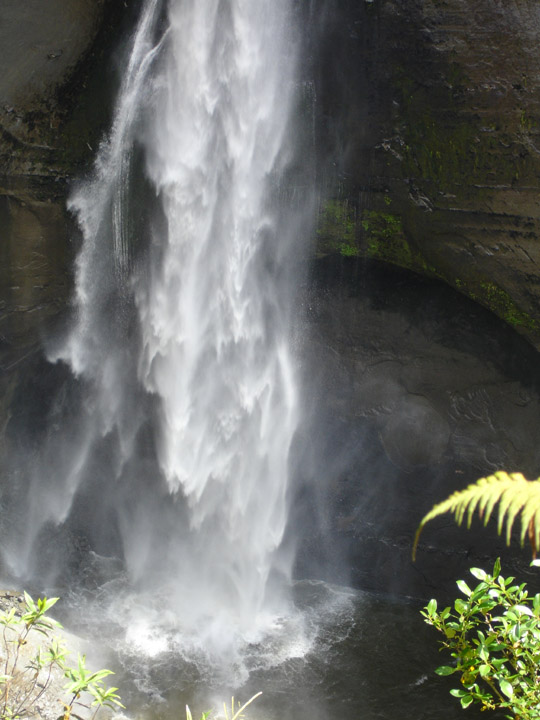 Returning to the bikes. 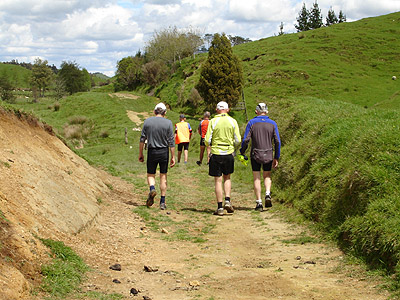 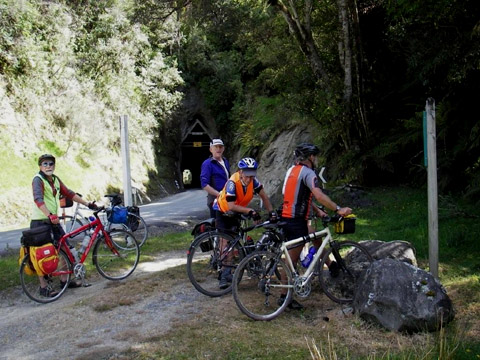 For many years, going back well before the movie came out, this tunnel has been known as
"Hobbits Hole" 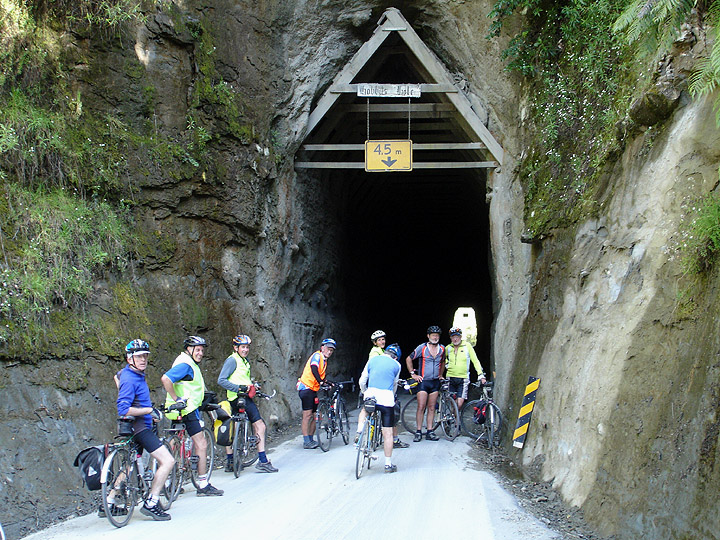 The railway line has an easier path through this rugged country,
It passes through 24 tunnels between Okahukura and Stratford.
Here the line is going under the Tahora Saddle. 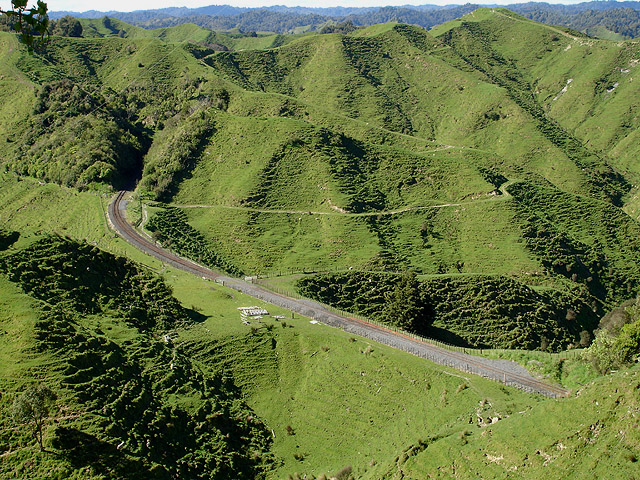 Mounts Ngauruhoe and Ruapehu are about 70 km
from the café at the top of the saddle. 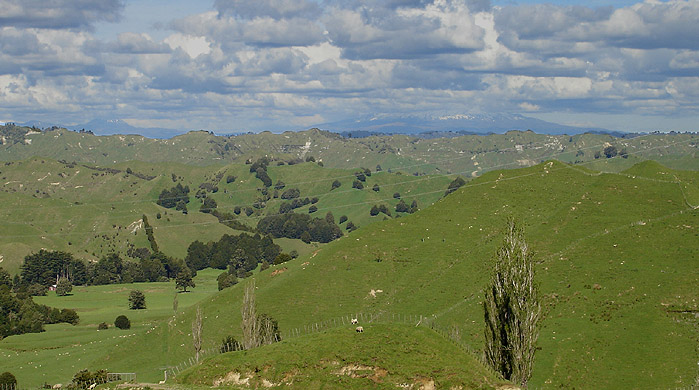 Whangamomona's main street gets its charm from a collection of buildings like these.

Seems like the pub and the garage are about the only businesses still operating there.

Some of our group stayed at the pub and 5 of us roughed it in the
local domain hall.  This is in a modest camping ground and offers
the basics - somewhere to sleep, a kitchen, showers and loos.

And, importantly, good secure overnight storage for the bikes. 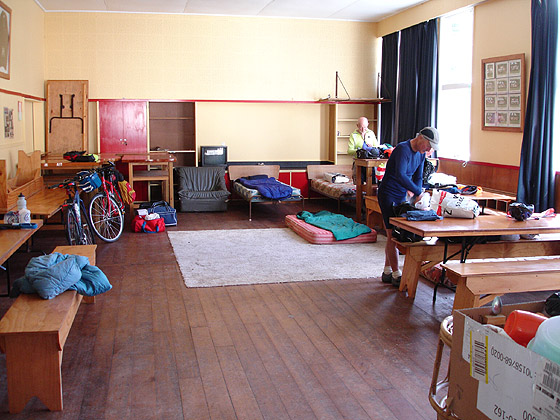 Before dinner, it was time for a well deserved cool drink. 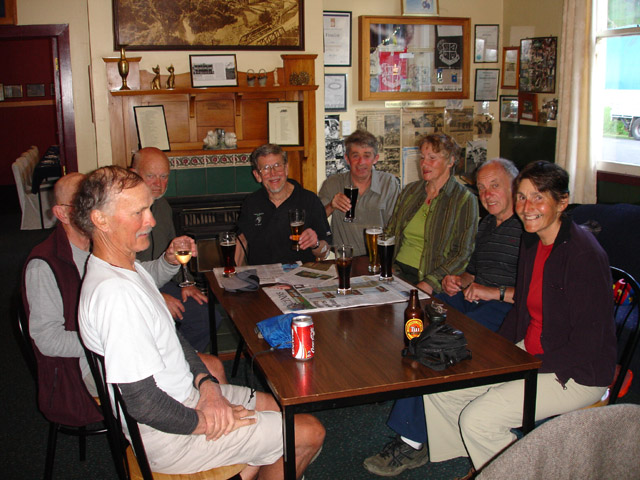 Geoff, our host, explains the delicious menu to us. 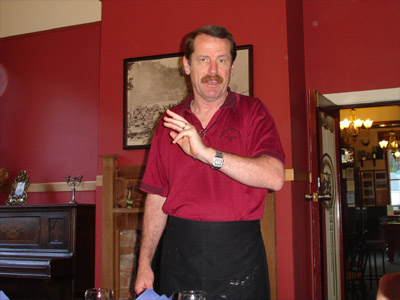 We all probably ate too much but, let's face it, we deserved it! 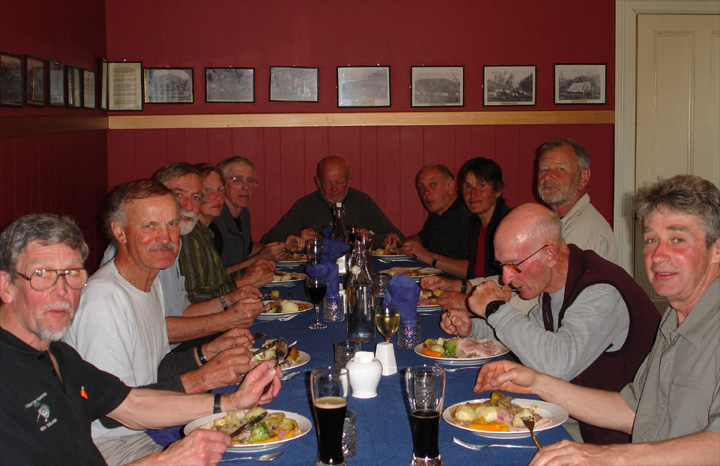